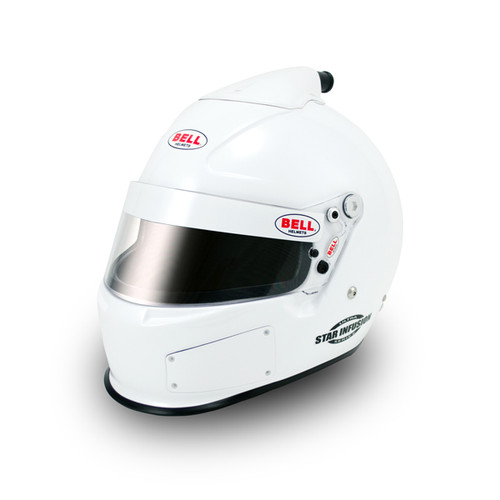 With the versatility of the Star Infusion, professional racers no longer have to choose between a side forced air or top forced air model. Sold in the top forced air configuration, the helmet can be transformed into a side (left) forced air helmet (side air kit sold separately). The Star Infusion incorporates Bell’s ground-breaking air chamber technology to increase pressure and accelerate airflow (when used with an external forced air system) to maximize airflow for improved ventilation and comfort. In the top forced air configuration, the Star Infusion divides the air inflow evenly in vent channels that direct ventilation to the front of the helmet to cool the face and prevent shield fogging and into the air chamber top pad, evenly dispersing airflow to cool the driver around the top of the head.

In addition, customers have the option of using a top forced air or side air kit with a traditional round or standard barb nozzle.

The Star Infusion takes a 287 SRV Shield which features the SRV-1 pivot system and thumb tab on the drivers left side to allow for easy shield operation. Each helmet comes with a clear shield and Bell visor strip as standard equipment. The Star Infusion also features Bell’s redesigned face piece with recessed areas that allow for seamless radio integration and easy installation. Racers can also customize the fit of the Star Infusion by using Bell’s Cheek Pad Inserts in 5mm, 10mm, 15mm and 20mm sizes to tighten the fit in the cheek area. In addition, replacement face piece kits are available for the Star Infusion in the event the front interior chin piece needs to be replaced. The helmet is available in White and Rubberized Matte Black finish – the rubberized surface is more resistant to finger prints and smudges than traditional flat finishes.

Customers buying the Star Infusion also may be interested in accessory items including an anti-fog double screen shield insert to eliminate fogging in high humidity environments, chin cover seals (small and large) that seal the bottom chin bar area of the helmet and a breath deflector which installs at the top of the chin bar and directs breath downward to prevent shield fogging.